This week I lost another friend to the disease that while part of my past, is constantly part of my present. A dichotomy, you can be cancer free, but never free of your cancer. The loss makes me want to get away, if only for awhile. When I feel like this my motorcycle allows me an escape, just the vibration and the sound of the engine, combined with the open road, and all else melts away, at least for a moment, a few hours, a day of not being in the world of cancer. So I’m going to escape again, and think about only the road.

It only happens a couple of times a day, and only in certain places. When the sun is low in the sky, and you are driving on an asphalt road. Small particles of quartz, which normally lie hidden from view in the black asphalt, begin to sparkle like diamonds scattered across the road in front of you as the rising or sinking sun hits them at just the 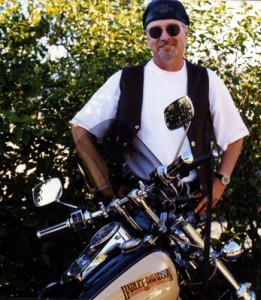 right angle. Thousands of them, blinking like the stars you see looking up at a clear sky in open country. It’s magical. When friends hear me talk like this, they are sure that I’ve lost what little sanity they thought I possessed. It’s just a road for Christ’s sake. But they do not see it in its entirety, for it is so much more. It’s part of the magic intimacy of two wheel travel. Of course this is only one small nuance of the motorcycling experience. But as I sit to write this dialog, the experience and vision is fresh in my mind, having recently experienced it on an early morning ride back from Big Sur to Laguna Beach. After almost eight hours on the road, I can’t deny the physical drain of the day, nor can I deny the exhilaration of having done it. Rudyard Kipling said that “All things considered, there are really only two kinds of men in the world; those that stay at home, and those that do not.” I am definitely of the latter group.

My non motorcycling friends find my love of the activity a curiosity. But that surprises me little. Motorcycling, while gaining popularity, is only engaged in by a small percentage of the population. Like the open ocean or the stark desert, people are either fascinated by it, or completely oblivious to its beauty and complexity, an alien experience of pointless purpose. But to the initiates, it can be an almost Zen like experience, even if they cannot articulate it in those terms. There is a place on the open road where nothing exists but you and the machine. The wind in your ears, and the throaty growl of the exhaust have blocked all else, cocooning you in their monotony. The vibration in your arms, legs, and butt are another constant that helps transport you to the place of inner experience. The machines inherent stability at speed is comforting, and the physics of gravity, friction, gyroscopic effect, and more make the ride almost effortless as you follow an unobstructed road to a longed for escape. It is a state of grace.

However at a standstill or slow speeds, the motorcycle is a creature of a different sort. These laws of physics are not at work. You are in a tenuous balance, keeping the mass of motor and metal, plastic and leather, upright between your legs. The inattentive gamble with serious consequences. It happens insidiously, at first a small lean off center at a stoplight, a shift in weight that is almost imperceivable. Then, when the critical point of balance is passed, the 500 plus pounds of machine, which is so gracefully controllable at speed, suddenly asserts its desire to become an unstoppable object intent on a manic bid to meet the concrete with complete disregard for polished chrome, perfect paint, or damaged personal ego. It is a move that even the strongest cannot stop once it has begun. So much for the state of grace. Anyone who has stood next to their machine in a busy intersection as it lays there like a dead animal, will identify with the impact, both to the machine and your sense of mastery, that this event has. So we strike a bargain with the machine, a promise of attentiveness and skill in trade for moments of blissful unity. This theme finds itself woven into much of the two wheel experience, and indeed even into the daily existence of our normal lives.

Motorcycling is a pastime of dichotomies. It is an endeavor which takes you from point A to point B, when what you really desire is the journey, not to get to point B. The risks of motorcycling, which are real enough, are both embraced for their adrenaline producing qualities, and denied at the same time. But then a little denial is a healthy thing, least we live in a world of constant fear and dread. The motorcycle rider simultaneously lives in both the world of controlling operator, and blissful passenger. The duplicity of knowing the freedom of mentally disappearing into the drone of a long ride, when the actions of operating the machine border on the level of the subconscious, and the actual reality that the lack of complete attention can result in consequences of the most dire sort, is approached with the same attitude. Nothing feels more perfect than carving the perfect turn, one executed with just the right entry speed, the correct amount of lean, the line of entry and angle through both executed precisely, all finished with the roll on of throttle accelerating you away from the curve. Put a series of turns like this in close sequence to each other, on a clear perfect day, free from the clutter of automobiles sharing your space, and you have motorcycle Nirvana, commonly known as the twisties. But if the Gods conspire on a given day, to put a little gravel, or a patch of oil, at an unseen spot in the middle of that curve, traction’s tenuous hold lets go. And it can happen to the best. This is the duality of motorcycling. In many ways it is the duality of life. We cruise along blissfully engrossed in the beauty of the passing moments, and without warning a few errant cells change our entire world. A patch of gravel unseen on the road, a patch of cells gone astray – each with their similar consequences. Dire. Sudden. And then the ensuing struggle for control.